Thanks to the nice guy who recommended this one on my favorite forum!

Haven’t watched the full movie yet as it’s a cheap-looking flick with quite a bizarre script from what I have seen so far.

But… it certainly has a great scene for this blog!

Watch the video before you continue!

This is the only scene in the movie where she is wearing a mask… or more correctly… maskS.

Let’s start with her outfit: Well, …… it’s safe to say that the costume designer isn’t a woman. 😉

Quite a revealing outfit and some impressive twins!

And these two are verrrry often presented like this throughout the movie.

Seemingly the director and/or the producers wanted to show them as much as they could without a nude scene.

And the poster of the movie shows very good what this movie is about: 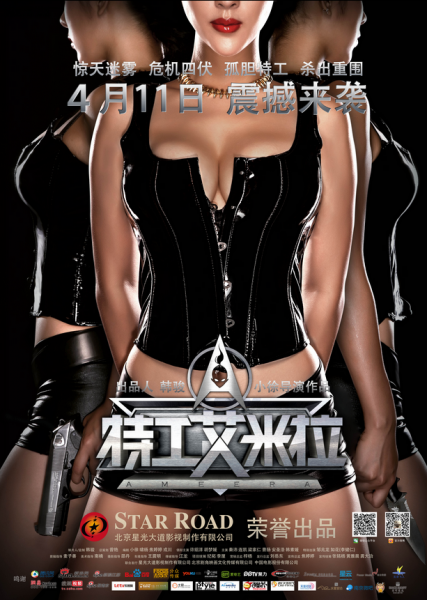 ….and yes, that is the complete poster 😆

Her masquerade is unusual and very interesting:

She does wear a simple mask as the base disguise and on top of that one a pretty large eye mask with some nice textures on it.

A very nice combination that is very rare!

…as his hand is clawing for her mask! But she quickly moves her head to the side (or pushes his arm aside?) so he grabs into the void.

I love unmasking attempts and they are quite rare … so I love such a scene!

He sees the sexy masked intruder and the first chance he gets he goes for her mask! Yes, that’s how someone should behave who fights against a masked woman. 🙂

The second fight with these two is even better!

Ok, the lighting is rather bad since there is that colorful background light.

But the fight is done quite well and as soon he gets another chance he goes for her mask… again! A good villain 🙂

And this time she can’t stop him as he rips off her mask! But to his surprise he only half of her masquerade…

So, this is a “partial” unmasking… a very rare element.

She escapes before he can make another attempt on unmasking her completely.

The stunt where she lands in the moving van is quite laughable (why has she to land in a moving/sliding van?).

Nice that she immediately unmasks herself.

Sadly we can only see her for seconds then before the scene is over too soon.

All in all this a verrrrrry good discovery as there are 2 really good fight scenes that include an unmasking attempt and a partial unmasking! Much more unmasking action as in the average scene with a masked woman. 🙂

I do have a bonus scene with her without her mask on:

Wanna know the title of this movie?

Thanks to all those who recommended this one over the years!

I had my doubts about this one, but I’m rather low on material and so I decided to make a post about it.

This one is exclusively on the blog and not on my Youtube channel for two reasons:

1) I don’t wanna risk anything in terms of showing “nudity” on Youtube, as they are sometimes very strict. I don’t think this clip should be troublesome, but I want to be on the safe side, especially after what happened to my old Frogwoman Youtube channel earlier this year.

2) I think the scene has some interesting aspects, but overall it’s rather embarrassing, so I don’t want it on my Youtube channel 😆

The movie is from the category “so bad that it’s funny”.

That works for me if I’m in the right mood.

The dialogues are really bad, and the heroine ….well…. isn’t really attractive or interesting for me.

The mask of the killer is good in terms that it is a great disguise. She really wanna make sure that her secret stays …secret.

What is really annoying here is that the killer in this scene isn’t always played by that actress.

You can CLEARLY see that they used a stuntMAN for it in some shots, which is really embarrassing as hell!

I mean the “action” doesn’t require a stuntman/stuntwoman at all in my opinion! And they couldn’t find any stuntWOman to do it?

I mean they just roll around on the floor a little bit. Every actress should be able to do that!

That is a BIG minus for me. It’s just hilarious when the killer is suddenly only half the size as seconds before 😆

I just love that there is an unmasking attempt in the first place. It’s great how she grips into the mask and tries to yank it off.

Such an unmasking attempt is sadly pretty rare to find!

The unmasking is done quite well too! I love the angry look on the face of the attractive killer. Certainly a pretty good reveal!

Overall I have mixed feelings about it. It’s a nice scene that could have been SO much better with some simple changes.

A better dialogue, a better heroine, no guy playing the female killer in some scenes….and you could have a GREAT scene.

The scene is from this movie:

And now ….2 new scenes in one clip. In the last clip our masked heroine had some problems with some “fan” of her. Now she hunts one thug and confronts two other thugs.

I can tell you that movie has great scenes but is one messed up flick. All the time jumps and nightmare scenes…. really weird. You will be confused…

The producer of this strange flick made some things right. He got a hot woman, put her into a real sexy costume and gave her a descent mask. Good work!

What he did wrong was the storyline…it’s one of the weirdest ones I have seen.

But all together it’s better than 95% of the heroine clips that are for sale in the internet so….good job!

In this video we have a female thief with a full face mask who just sneaks out of a mansion. (Well, I don’t know what happened in there)

But some folks seems to know that she would be there. And our little thief has to escape with her secret identity intact. Will she make it?

And here is the video, see the masked thief in action:

I will try to get more info on the video.

Well, my opinion about the Catwoman movie: All in all it sucks big time! The costume is sexy as hell but yet a joke! Her mask is nice (covers most the important parts) but misses any security measures (like a chin strap), you could simply pull it off without problems. You never see Catwoman unmasked (in costume but without the mask)…. But at least it has an unmasking attempt by the clumsy detective! So this scene is a good one in my eyes!

So here is the scene:

Your opinion about the scene and the movie in general?

So, today I wanna post something very special. The first part of Powercat 3, or as I name it: Powercat and the imposter. Powercat is preparing a bath as the doorbell rings. She is in her heroine-outfit and is very surprised to see the visitor….. 😉

For my the video is very, very good. A sexy outfit (or should I say: two sexy outfits), lots of fighting, unmasking scenes….can’t ask for more 😉

Here is another nice movie scene from a fine movie named “Las Invencibles”. I enjoyed watching it, despite the fact I don’t speak spanish 😉

Special greetings to Mr.X who understands the language a little better 🙂

A masked female vigilante/heroine is about to be hanged for a crime she doesn’t commit. Now it’s time to reveal her secret identity in front of all the town people…

The mask is not so great in my eyes but at least it’s one of the bigger eye masks, which hides something 😉

And by the way: I updated the links section!

In this episode Batgirl (Barbara Gordon) is introduced. She wears a batman costume as Robin runs after the unknown masked maiden. He grabs her mask, pulling it, stretching the material. And all that in public! It seems like her mask would rip completely, but she is lucky. He rips the lower rear of her mask, exposing only her hair beneath it….

Was it his intention to unmask Batgirl? We’ll never know for sure… But in my eyes a great unmasking (attempt) scene! 🙂

Here is the link to the episode:

For issue number 9 from “Masks off” it’s time again for Batgirl (Cassandra Cain)! She gets into a fight with Green Arrow, an arrow rips a little hole into her mask! He takes the opportunity and grabs her mask, stretching the material, ripping the hole wider to see the face under the full face mask! At the end Batgirl is partially unmasked….

A very good example for a sexy maskrip 🙂

Ok, after two unmasking attempts, captain Grisham has one final opportunity. With the lack of oxygen, the queen of swords is blacking out! Will he take advantage of the situation and unmask her while she is unconscious?

Oh man, he is a moron…without luck. 😉

But what an episode! 3 unmasking attempts in one tv-episode….Great work! 🙂

The evil Captain Grisham trapped the Queen of Swords in a mine. She can’t escape and he wants to unmask her once and for all. This is the second scene in the mine. Will he succeed this time?

Very sexy situation in my opinion… 🙂