Check out the detailed review incl. pictures and my Batwoman cuts on Batwoman – Season 1 – Episode 11!

(click to enlarge – more pictures on the page of episode 11, link above)

I made an extra page about the different cowl versions in the TV show!

Time for another video from the Another scene from the Villaines compilation!

The movie itself isn’t worth watching, even the very short scenes where the masked killer strikes are really bad.

BUT…..the movie does offer a fine final struggle with the masked villainess!

Please excuse the poor picture quality, there isn’t anything better than an VHS source available to this one. It is a very rare movie with only 33 votes om IMDB.

What I really like about this scene is the line: “Take off her mask!” and that she fights back as he wants to unmask her.

A real shame that the cowardly gangster shoots the unarmed woman. I think they are on the same side, but they decided to get rid of her at one point.

The unmasking is solid and without a cut. Too bad she wasn’t shown properly in that outfit before this scene.

Wanna know from which movie this is?

What do you think about this scene?

Check out the detailed review incl. pictures and my Batwoman cuts on Batwoman – Season 1 – Episode 10!

*EDIT* Screenshots and a Batwoman edit are now available! Check the link above

Well, saw the last two episodes of the crossover today, but I will write about it on friday I guess.
Today I wanna show you this brilliant trailer for episode 10 of Batwoman (January 19):

–
[WATCH the TRAILER FIRST!]
WELL……not only we have a masked, female vampire….named Nocturna, who was in the comics as this epic scene happened:

….but we also (seemingly) get a forced (attempted?) UNMASKING!
“Take OFF the MASK, Batty/Baddy!” (short for Batwoman)
Seems like Alice wanna take a nice video of Batwoman unmasking herself!

She does already know that her sister Kate is under that cowl …..but I guess she wants to have some real proof to blackmail her 😉

And if you take a close look at some of the frames in the trailer……Batwoman has actually two kinds of masks! 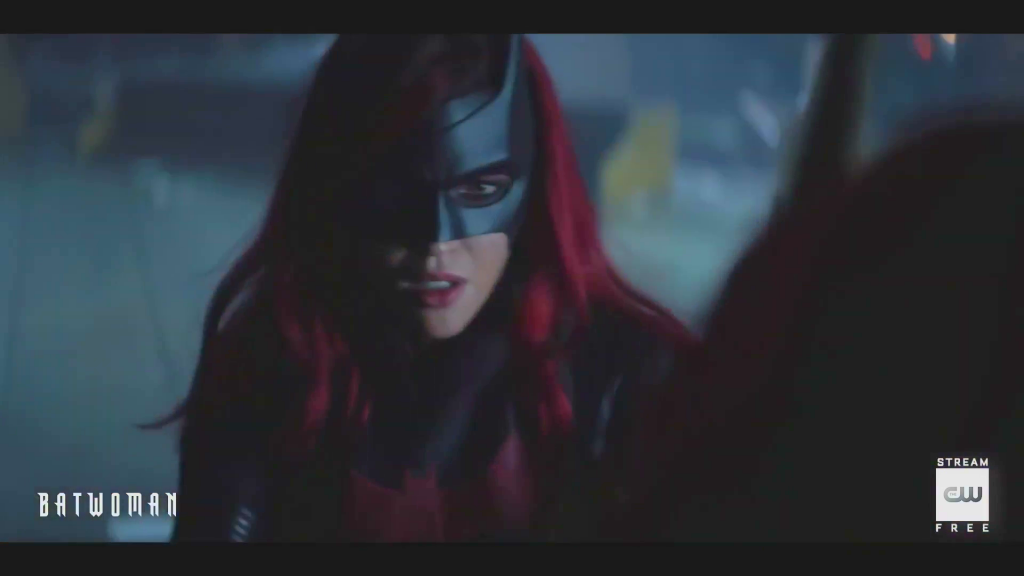 ….no chin strap! And is that her/a cowl in the foreground?
Why does this other mask exist? Does they change her cowl? IF yes, why? This mask would actually be less secure!
Or is that a backup mask? Verrrry interesting stuff…. 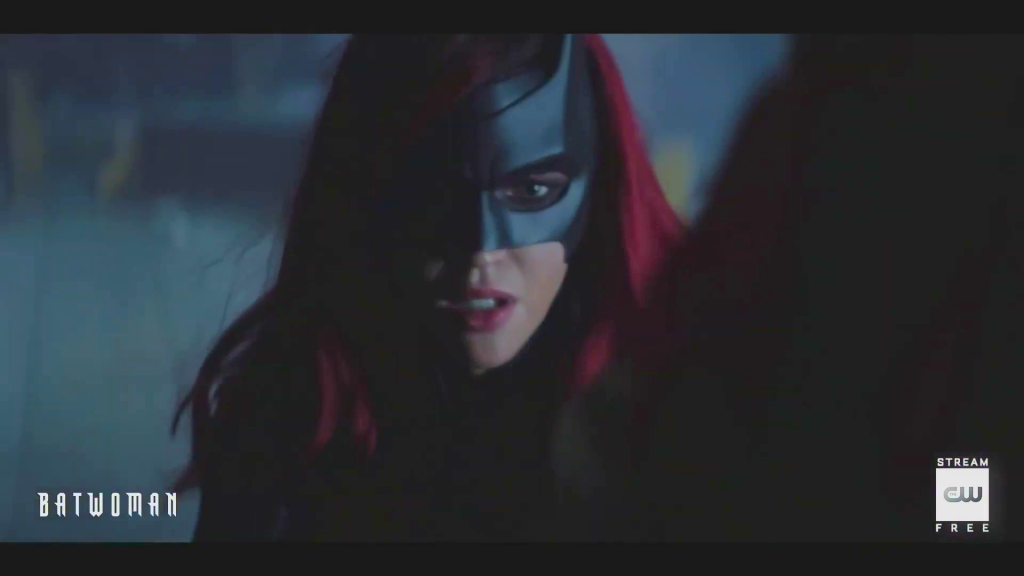 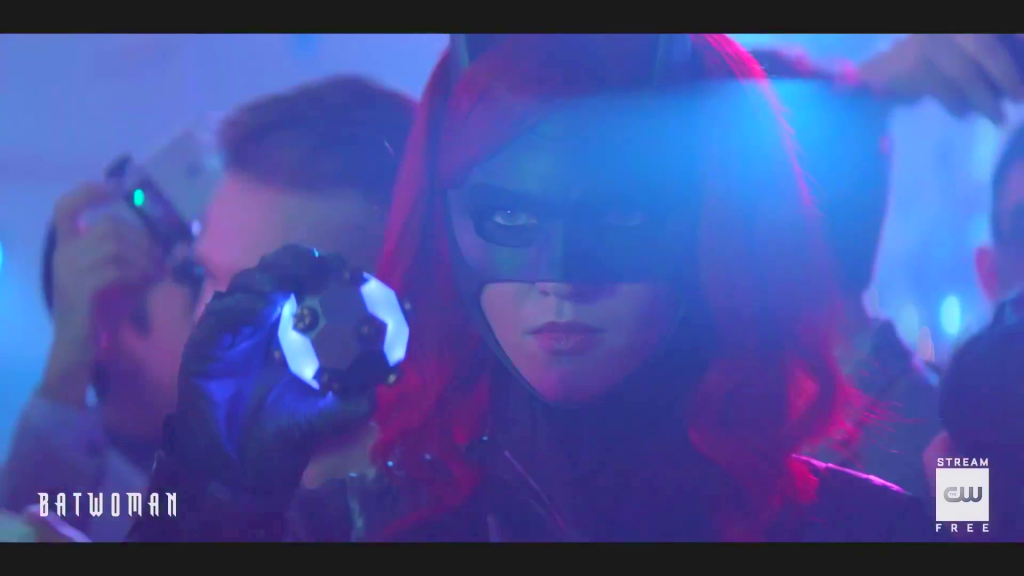 ^ The normal cowl with chin strap. And what kind of device is that? Has is something to do with Luke’s work on Batwoman’s secret (see synopsis below)?
Would make sense that Luke would come up with a technical solution. But how does it work?

—
The official Synopsis:
AFTERMATH – While Gotham busies itself reacting to Batwoman’s (Ruby Rose) awkward encounter, Alice (Rachel Skarsten) celebrates her ultimate act of vengeance with Mouse (guest star Sam Littlefield).  A devastated Mary (Nicole Kang) focuses on Jacob Kane’s (Dougray Scott) trial, while Sophie (Meagan Tandy) seeks advice about her love life from someone unexpected.  As they tackle the newest threat to Gotham, Luke (Camrus Johnson) prioritizes protecting Batwoman’s secret, and Kate must decide what she is willing to do to honor Batwoman’s identity…and her own.  Jeff Hunt directed the episode written by Caroline Dries (#110). Original airdate 1/19/2020.
–

Oh man, good that the episode is only some days away. This trailer offers some many interesting questions!
And a real unmasking scene for sure! No matter if Alice succeeds with her plan or not….
–
Never has a trailer with just more than 20 seconds (of real running time) me excited so MUCH!

After watching the episode, it is clear that the description of the trailer was wrong.

The trailer shows scenes from various episodes….I guess from the next 3 episodes!

Friday I will post about the last episodes from the big CRISIS crossover, but today…

… I found these promo pictures for the Arrow episode “Green Arrow & the Canaries” which will be shown on the 21st:

….well…….in this episode there will be 3(!) masked women! The new Green Arrow Mia Smoak and 2 canaries (Laurel / Dinah).

This episode will be the pilot episode of the possible Spin-off TV show that might start later this year.
Due to time traveling all 3 women will still be young in that 2040 setting (not like I feared).
So, that TV show would have 3 masked women in the main roles!
Only eye masks…but still…..that would be so fantastic!
Especially with Katherine McNamara (in the last picture) as the new Green Arrow!!!
Oh man…. the golden Age of masked heroines in movies and TV would become even more golden. 🙂

McGyver strikes again! Again a masked woman can be found in one of the episodes!

This time he battles a masked mertial arts teacher.

Well, here are the good and bad aspects of this one from my perspective.

The mask is pretty ugly/unsexy

The red shirt covers way too much 😉

The mask is very effective in hiding her identity

A nice little scene for me! I would train as hell if Tia Carrere would be my (masked) teacher…. 😉

The “basket” and “tent” gags are pretty funny! And it seems that McGyver has issues with fighting against women when she tries to hide that aspect (unsuccessfully).

Here is the episode title:

Here you can find another scene of her in another role in the same TV-show! And again, she is wearing a mask! 🙂

Well, to celebrate the BIG news from yesterday (Batwoman got renewed for a 2nd season)…. I would like to donate one free month for the Maskripper VIP club!

All you have to do is to answer these questions:

A) Who is playing “Alice” on the Batwoman TV show?

B) Who directed episode 8 “A mad tea party”?

C) Which actress played this character in the show? 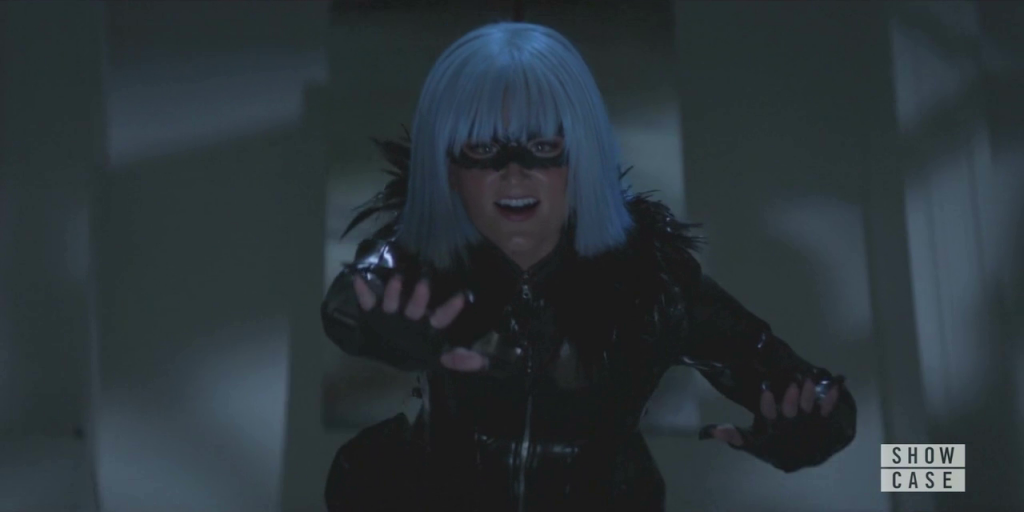 *EDIT* Competition is over, we have a winner! 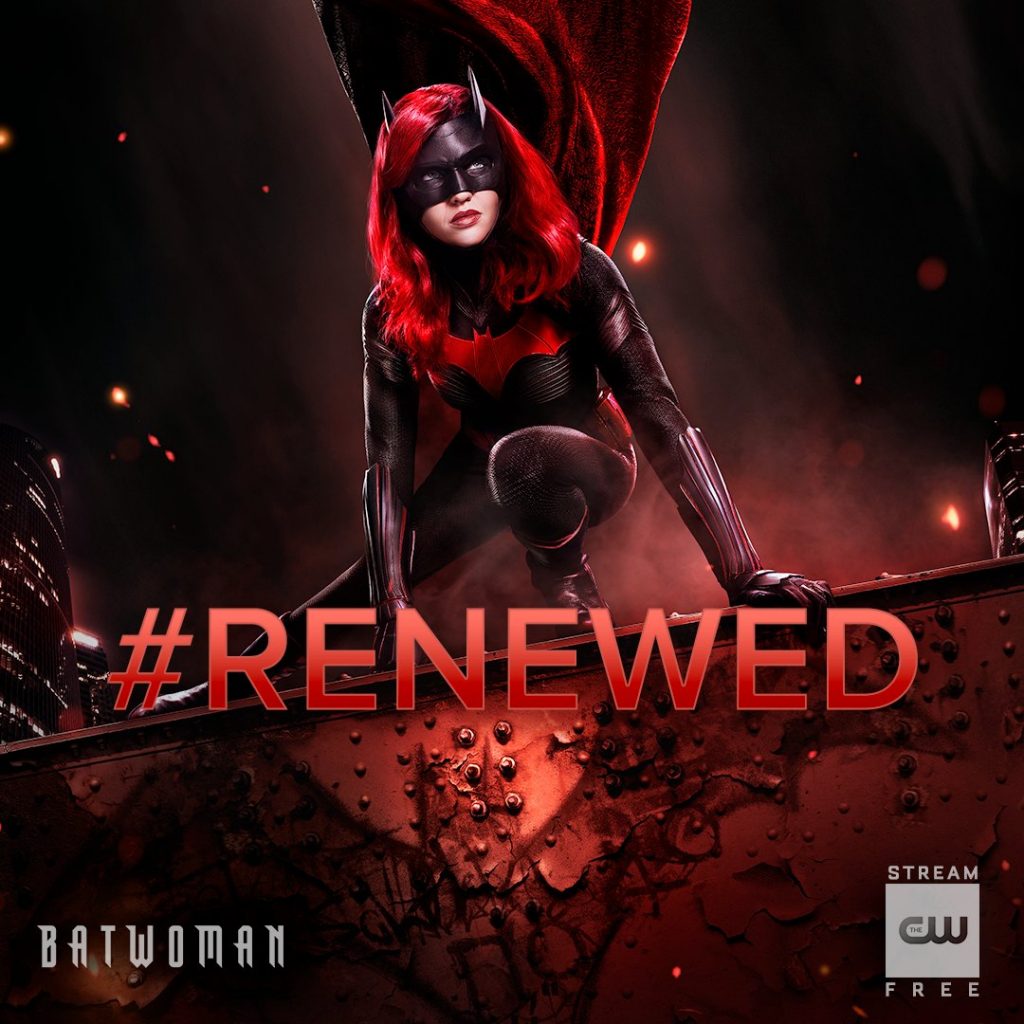 –
I already celebrated with a good whisky!
Kind of a surprise for me that ALL CW superhero shows got renewed. Even Legends of Tomorrow was renewed for season 6….before their season 5 even started!
You can like the CW or not, but it is really a good partner for these superhero shows, not ONE…not ONE of these superhero shows… got cancelled ….ever!!!!
(Arrow only ended because of Stephen Amell had enough after 8 seasons)
–
And this means…….Batwoman is actually the FIRST TV show with a masked female lead….that made it to a SECOND season!
The show suceeded where shows like Queen of Swords and Black Scorpion has failed.

The last two episodes of the CRISIS Crossover are just one week away!

Here is a new poster: 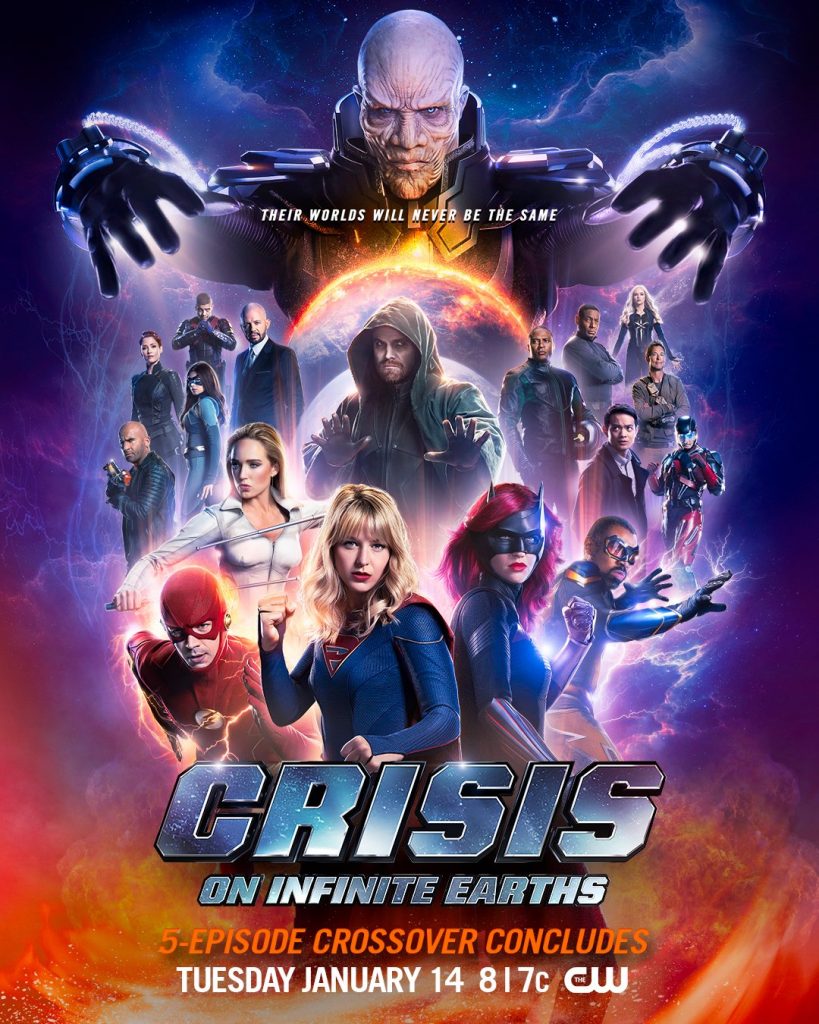 Time for another video from the Another scene from the Villaines compilation!

Well, this one wasn’t even directly in the compilation but it was recommended to me from a very friendly user as this TV show has indeed several masked villainesses/women.

In this scene we have a masked villainess that wants her “revenge” on McGyver.

[watch the video ….before you continue!]

[watch the video ….before you continue!]

I like how good that mask hides her identity, a very effective mask.

A shame that she self unmasks before someone had the chance to try to unmask her!

Funny thing is that the fact that she is wearing that mask doesn’t make any sense in the story. She unmasks herself and runs aorund without the mask. She doesn’t hide her identity anymore.

Well, and I guess that worked for many viewers.

If you are interested on how the story will end for this villainess….check out this bonus video:

There are more scenes with her in that episode, but without the mask as well.

If you wanna know from which episode this is:

What do you think of these scenes and her mask/outfit?

3 more videos from a great TV show (pretty new). A team of 3 masked women (in sexy catsuits) have to battle the police and gangsters. With lengthy martial art scenes, shootouts AND…..unmaskings!

I will upload more from this show in the next months to come…..because this show offers so MUCH! Besides the Batwoman TV show this is my favorite TV show with masked women from the last 15 years.

Pictures of two of the three masked women in action in these clips:

…then join the VIP club on Maskripper!