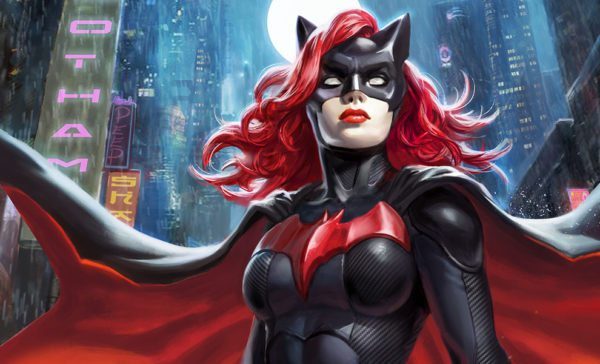 I guess many of you know already…but it is a MUST for me to post that here.

2 months ago we got the news that Batwoman would be included in the next Crossover event of the Arrowverse.

Back than I already hoped… that that COULD lead to her own TV-series…but I never believed that they would go on and decide to actually do that ….months before that crossover.

And now we are getting a complete TV-series with a MASKED heroine…that IS SO GREAT!

—> Please stick to the tone of the comic series!

A little darker (and ….much darker than Supergirl for example) and a little grim.

—> Please stick to the costume and mask of the comic series!

I want the iconic Batwoman mask from the comics, that actually really hides her identity together with the wig. I want a sexy costume…perhaps with rubber or leather (or spandex).

I don’t want a damn eye mask for her! (producers: “let us show her face”)

—> Please let her have a real secret identity!

Her identity must remain a good secret. I hope that only very few actually know who Batwoman is.

(unlike for example: Catwoman in “The Dark Knight rises”)

—-> And please….please let there be some villains that actually are interested in UNMASKING her

That is I guess the only point where they shouldn’t stick to the comics too much….

Of course she can’t be unmasked in every second episode. BUT wouldn’t it be “normal” that you would want to see the face behind that mask?

That they would TRY to unmask her?

OK, I know that can’t be happening to oft…but I know around 60 or more Batwoman comics. And nearly no one of her enemies seem to care who is under that mask…

I mean… you don’t need some unmasking fetish 😉 to be interested in that. Just a little curiosity.

Let’s say 2-3 unmasking attempts in one season with over 20 episodes. And 1-2 unmaskings.

Ok, but now a video that they released to the San Diego comic con last week:

The really important part is around 1:40…

Well, not much/nothing to see, but I like the dialogue. 🙂

I hope that there is more to see in video in the near future!

What do you think about the TV-series?

What are your hopes?

If you like masked heroines like Batgirl…you need to check out this ongoing web-series from ALZI production!

They started with two Spider Gwen and a Batgirl video. After that they started the Batgirl web-series.

So far it has 4 episodes and new ones seem to arrive every 2-3 weeks.

And here are the episodes 1-3 of the Batgirl web-series:

Well, I really like how the series develops! Her enemies getting stronger but she manages to beat them.

I think she will get into more problems in the future episodes… some (more) peril scenes included.

Her costume is solid, the actress is pretty and talented and the action scenes are good for such a low-budget series.

I hope for many more episodes with Batgirl and more footage from Spider-Gwen.

Wow, what a bitter end for Batgirl in that episode. She couldn’t stop the thugs from unmasking her!!! Now she is into real trouble. I’m very curious how that will turn out for her.

What do you think about the series?

What would you like to see in future episodes?

Discovered this movie a while back, and it’s time that I present it here to you folks.

It’s about a young woman who starts to fight crime. And there seems to be a lot of villains who have problems with that 😉

And here is a “behind the scenes” -video:

Well, in the first scene it looks like some sort of comedy…but luckily there is enough action in it later on. So I have hope for a decent superheroine movie.

And since we only have very few movies with a masked heroine…I am really looking forward to this one!

Ok, she just has an eye mask. But that’s ok…can’t be very picky with that awful small selection on movies with masked heroines 😉

IMDB says that it came out in Indonesia on november 23rd in 2017. And that’s all the information there is…no info if or when the movie will be available elsewhere.

Does anyone has more info? Or does know where to find that movie? That would be really great!

What do you think of this trailer? Do you wanna watch the movie?

For today I wanna show you a masked female vampire that fights VS Wesley Snipes. To be prepared VS “evil” light she is completely covered and therefore masked perfectly 😉

Well, she certainly know how to handle her blades 😉

And she does look really sexy in that tight catsuit. And the mystery of her mask is a great addition to the scene.

You just want to see her unmasked…

Your idea about this scene?

In case you don’t know which movie this is:

I updated the VIP-Club with new material! 2 new videos (one extra loooong, over 15 minutes) for you to enjoy!