Thanks to a helpful comment I got this scene recommended 🙂

Really weird, I actually saw most of the seasons of this TV show including the one with this scene, but somehow I totally forgot about it, I guess I didn’t make notes back then like I do nowadays.

So, what do we have here? We have Oliver Queen getting attacked by a masked female ninja!

And no, I’m not talking about the Arrow TV show…

Yeah, sadly a rather short scene with an even shorter fight, and we don’t get a good look at the masked ninja….

…. BUT we get a masked female ninja that actually gets unmasked by someone else! And she isn’t unconscious or tied up! 🙂

That is rather rare and my favorite version of an unmasking. Ok, she could have struggled longer and put up more of a fight, but after all, she actually knows him and didn’t want to really hurt him.

The reveal is done well as we fully see how he unmasks her, the camera doesn’t cut away.

There is a tiny continuation error as he has her pinpointed down. First, the (weirdly red) tip of her nose is showing, but a second later the fabric is covering it up… quite a magic mask she has 😉

I’m quite jealous of him in this scene. I wouldn’t mind swapping places with him…

One day I will have to re-watch the Smallville show from beginning to end, even though I’m already buried under a pile of movies and TV shows that I need to watch or re-watch.

Interesting story, but NO masked ladies AGAIN (except in a flashback)!

Thanks a lot to the guy who recommended me this one!

In this one, two masked agents break into a house to retrieve some valuable data.

But things don’t go as planned….

It isn’t allowed to embed this video on another website and it was blocked in some nordic countries.

So that link above will lead you to Youtube to watch it here..

A good disguise and quite a dramatic turn of events.

I think she overreacted big time, I mean her partner was beaten with a bat, ok, but that’s no reason to shoot someone.

And if she shoots it doesn’t need to be a deadly shot.

Ok, it was pretty dark… but that boy with his bright shirt was still visible well enough…

All in all a solid scene.

Later in the movie, we have terrorists in gas masks. There is also one female terrorist, but she is infiltrating the event as a waitress and the only terrorist that doesn’t wear a gas mask at any time.

Wanna know the title of the movie?

All in all a good episode with a dramatic ending…. but after we got some minutes of Wildcat in the last episode, the masked ladies got …another… break!

So we have another episode of Courtney and friends…. in this show that has this mysterious “Stargirl” in the title.

Well, I guess some of the audience already forgot who that is by now 😉

Finally, we (seemingly?) see who the big villain is, even if that has to be confirmed in the last episodes of the season/show.

It was rather weird that he appeared in that mask which he then took off after some seconds.

I mean, why was he wearing it in the first place? We never saw him in that mask…if I remember correctly.

There are only 3 episodes left now and I wanna see some ACTION in the last episodes of the show! But I think it’s a safe bet that the team finally will be in action against the bad guys.

It was very nice of Courtney that she said that she killed Cameroon’s father and protected *EDIT* Rick with it. But well, that won’t make a difference now after we know that he is still alive.

It will be interesting to see if Rick will maybe temporarily join the bad guys after he is under the constant influence of his hourglass. Right now he is no help at all for the JSA.

Javicia Leslie will be in season 9 of the Flash in a double role!

She will be Batwoman/Ryan but also 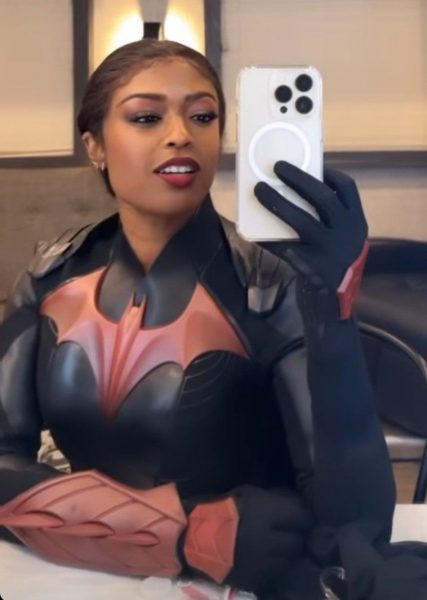 After Batwoman’s own show was not renewed earlier this year it had a very unsatisfying ending.

I’m glad that she will be back and hope she will be in many episodes! Also, I’m looking forward to this double role, very interesting.

Would be nice to get a little more “closure”.

After the Arrowverse is ending soon it will be one more reason to look forward to the last season of the Flash!

I hope for many masked ladies in that one, would be a nice farewell gift 😉

Some of you may know Heidi Klum, a German model and also the host of the TV show “Germany’s next top model”.

Lately, her daughter Leni appeared more and more here in the press and she attended her mother’s yearly Hollywood Halloween party.

While her mother was costumed as a…. giant worm(!), Leni was dressed up as Catwoman.

Well, that costume is already a hundred times sexier than the one on the latest Catwoman in “The Batman” movie.

The cowl is ok and disguises her well enough, it doesn’t really fit to the suit though as it has the stitches on it and the suit hasn’t.

The boots are nice, but not the best choice.

Her suit is simple but very sexy. Not sure about the material, the press mostly says it is latex, but they often label a lot of stuff as latex that isn’t actually latex.

I wouldn’t mind being robbed by such a Catwoman!

This particular picture of her produced a little scandal as she wasn’t 18 back then and some complained:

If you wanna see more of Leni Klum, check out her Insta:

After last week’s episode was my least favorite one of the season, episode 9 was MUCH more interesting!

Finally, we have a pretty long scene with Wildcat and Dr. Mid-Nite.

And also with good action in it!

Not exactly the hottest match as Wildcat was fighting against “Grandma Freeze” as I call her, but with some nice perilous moments included.

Ironically Stargirl is again missing from her own show as “only” Courtney is in that house as the action unfolds.

I am very curious to see how the show is going on forward after this episode, there are 4 episodes left and it’s time that we can see the plan of the bad guy.

And what will happen to Snakegirl aka Cindy?

Also, Rick is out of control right now, and that has to be fixed.

It was nice that Dr. Mid-Nite finally had her first real fight after she discovered the combat mode of her goggles.

The end of this season will also be the end of the show as it was revealed that there won’t be a season 4.

During season 1 this news would have been very sad, but by now it doesn’t have much of an impact on me.

I hope that shows with a masked female lead will be done in the future on another network (and studio).

The Arrowverse is on a decline for a while now and will end with the last season of the Flash.

In one video, a naughty Catwoman wants to play with a helpless Batgirl

In the other video, we have a Batgirl fighting a masked villainess!

+ you will have FULL access to my 3 (self-written) Maskripper fetish stories (2 over 15 pages, one with 8 pages)!

+ The rising star and her dark secret (no preview available)

(A rising star enjoys having anonymous latex sex until one guy gets…..curious to see who is under that mask and catsuit ;-))