For today I got 2 rather short scenes, but interesting stuff.

In the first scene Flashs cowl gets damaged. The rubber of his mask gets ripped in some places. I love it when masks gets damaged….and now imagine a woman behind that cowl…. 🙂

And I have another short scene for you.

James Olsen talks with Supergirl about his plans of unmasking himself (as he is masked vigilante Guardian) and why Supergirl needs to keep her secret identity (that brilliant ….”glasses + different hairstyle”- disguise…. 😉 )

Yeah, how much I wish Supergirl would wear a mask… I like her disguise as Kara. And the fact that she really cares about not being exposed as being Supergirl.

It’s always a little thrill to me that she might be exposed and outed as Supergirl.

Let’s see how long Supergirl can protect her secret from Lena. 😉

So, it was finally about time that Reign gets unmasked. Well, most of the folks actually know already who’s under the mask (damn!), but the daughter of Reigns alter ego doesn’t know, so there is a big surprise coming for her…. 🙂

Of course it was pretty uncool that here identity was known to the good guys before this unmasking. But the fact that her daughter didn’t know about it is nice. In my version Reign would have been unmasked after a long battle. No one would know about her secret identity. Supergirl would rip off her mask while Reign would fight desperately against it. And then her big secret would be out. My biggest fear was that she just unmasks herself…that didn’t happen, that was a good surprise. It’s better that her mask comes off like this. Even though she doesn’t care at all about her unmasking… 🙁 . The reaction of her daughter to the unmasking is pretty cool.

And that the mask would fall off like that…after she has been in much more intense action scenes…kind of odd.

The mask on the floor in strapless. The mask she wears is held by straps…

But such an “accidental” unmasking is pretty rare. I like the scene (even it had much more potential).

For those who haven’t read my post on “Behind the mask!”…….

WOW, that’s so FUCKING GREAT! ?
Short version: In the next crossover event of the CW shows (The Flash, Arrow, Supergirl, Legends of Tomorrow) Batwoman AND Gotham City will be introduced!!!! That will be aired in december.
That will bring up great possibilities in the future.:
Perhaps characters like Catwoman and Batgirl as well? Perhaps an own Batwoman Show? 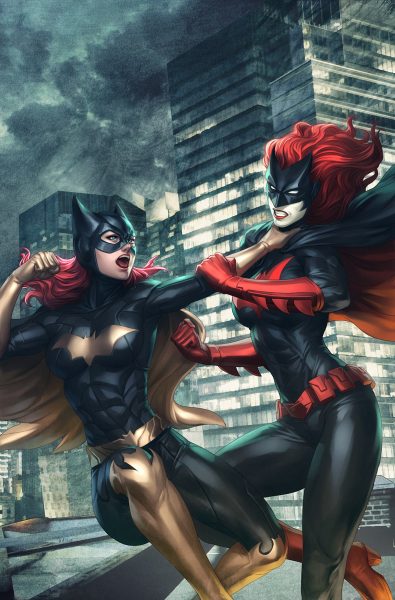 Oh man, this news makes me happy….very, very happy!
I hope they don’t screw up the costume. I want that Batwoman mask from the comics. A big mask that hides her little secret perfectly.
Well, since her mask wasn’t changed in the years in the comics, I hope they just took that version.

In the Gotham episode that was shown last week a masked woman is introduced! A masked woman with three short scenes. And in one she fights against Gordon!

And the chances are very high that this masked girl is/will become Harley Quinn! The villainess that is madly in love with the Joker.

I like the fact that Gordon really goes for her mask at the moment he gets the chance! I hate it when these opportunities won’t be used. Like in the Black Scorpion TV-series. Some villains just walked away after knocking out Black Scorpion….

But you don’t need a mask (unmasking) fetish like us to wanna see the face behind a mask. So Gordon unmasks her…

Ok, she is knocked out during the unmasking, always a minus for me. And the mask is going off to easy…it seems that she only used some sort of glue to stick the mask to her face.

But what I really like is the fact that she is still somehow a little “masked” with that Harley-hood which is still in place. Ok he sees her face completely, but not her hair.

He recognises her but the viewer still haven’t seen her full head.

That is revealed in a later scene….

In case you wanna know the episode in which this scene is:

Your opinion on this scene?

Time to make a post about my most anticipated “masked women” movie in 2018. The first trailer showed some great moments in Evangeline “Lost” Lilly in her new Wasp costume.

In addition to the costume she wears a helmet-type mask that conceals her identity pretty good.

But now a second trailer has arrived where we can see some scenes with Ghost, a masked villainess! So, we do have 2 masked women in one movie. Now I’m really looking forward to this one!!!

Let’s start with the new trailer:

Well, it seems that we will see some unmaskings of the Wasp, as she runs around in her costume but without her helmet/mask in some scenes. I really hope for a forced unmasking or even better that Ghost may unmask her. But I guess that may be just wishful thinking. Don’t know if someone else could actually remove such a helmet?

You may have already noticed that Ghost herself is UNMASKED in the last two pictures as well! I really hope that she doesn’t unmask herself in front of the heroes…

But it will be very interesting how that mask and cowl will be removed. It seems that the cowl is attached to her suit. Oh man, the possibilities…..

Ant-Man and the Wasp will hit theaters on July 6th (USA) and on July 26th here in my country.

And here is my special version of the trailer with the really important scenes ;-):

What’s your opinion on the Trailer?

Will you be in the cinema to watch it?

I updated the VIP-Club with new material! 3 new videos for you to enjoy!