Black Lightning has only a few episodes left in its final season, but it still delivers good scenes with masked women!

And this one is so far the best of the season. We have a nice fight scene with a skilled assassin that fights Blackbird and Grace, who both have really good masks…in my opinion.

Earlier in the episode, the assassin tortured a guy so he would give up the secret identity of Blackbird, but he didn’t as he just didn’t know who she is.

But the assassin manages to find Blackbird and Grace….

Watch the video first before you continue!

As I said before I really like these masks! They cover their faces effectively but still show the eyes and parts of the upper face. These “half masks” are a good compromise between these tiny eye masks (example: Black Cat) and full-face masks (example: Spider-Gwen) for me.

The fight with him is pretty long and I was quite thrilled as I watched it as I always hoped he would manage to unmask one of them or both. Damn, how great it would be if at least his hand would have yanked on one of the masks in an attempt to yank them off.

But still, this is quite a highlight for me as you won’t find many scenes like that! Not one but two really well masked women in a long fight with a skilled attacker….rare stuff!

He is still out there to hunt down Blackbird…so I hope for more action scenes with him and other masked women in the next weeks. 😉

That is the episode with this fight scene:

Check out the very short review on Batwoman – Season 2 – Episodes 7-12!

Check out the detailed review incl. pictures and my Batwoman cuts on Batwoman – Season 2 – Episode 11!

You can watch the episodes LIVE on the CW (Sundays at 8 PM) or watch it also for FREE on the CW website (link) and on the CW app, starting Mondays after an episode has been aired on Sunday!

(click to enlarge – more pictures on the page of episode 11, link above)

This one was recommended to me quite some time ago, but I had problems getting my hands on the movie.

Nowadays I have a much better system to organize such things, but not back then….

This movie is sort of a “must-have” if you like to see masked women!

I could so many more scenes out of that movie as we have 2 women who are masked for the bigger part of the whole movie!

But as I can’t post all these scenes I focused on my 2 favorite scenes.

…sorry, had to remove it…..you are too late…

I cut the scenes down to under 4 minutes…and it was blocked immediately on Youtube. I even tried it with just one scene with under 2 minutes….but the same result 🙁

So this will be another video that is only available on this blog and not on my Youtube channel.

Now to the scenes in the video (WATCH the video first!):

She looks very sexy with that mask on her which conceals her face really well.

I really love how close he is to her. With one quick pull, he could unmask her and find out who is hiding under that mask!

But well, that wouldn’t be too good for his health I guess 😉

But if I would be in his position…..I would have a hard time hiding my……excitement.

At first, I was really disappointed that she unmasked herself….but well, her secret identity was gone by that time anyway as the cops had figured out who she is.

This is a far too common trope…. that they figure out way too often who is under a mask without physically unmasking her/him first.

But on the good side, we have a nice self unmasking. And it’s not the only one in this movie….so if you wanna see the other ones….you should watch the whole movie!

But of course, you won’t find any scene where someone unmasks one of the female robbers….if such scenes were in the movie….I would of course post them 😉

This is the title of the movie: 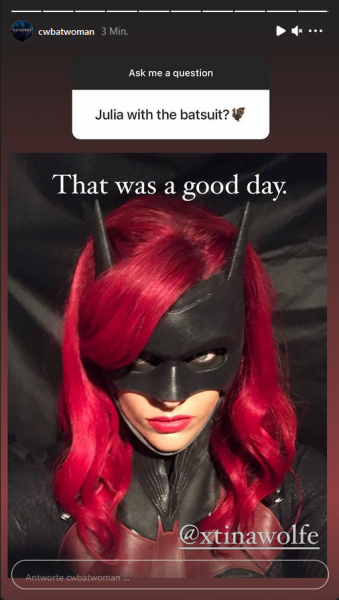 Check out the very short review on Batwoman – Season 2 – Episodes 7-12!

Check out the detailed review incl. pictures and my Batwoman cuts on Batwoman – Season 2 – Episode 10!

You can watch the episodes LIVE on the CW (Sundays at 8 PM) or watch it also for FREE on the CW website (link) and on the CW app, starting Mondays after an episode has been aired on Sunday!

Don’t know how I forgot about this movie. I do have the DVD in my collection for a really long time now.

Recently I decided to re-watch the movie and now it’s time to make a blog post about it!

In this one 4 stunning women/models decide to rob some banks. The leader does also is the getaway driver and so we get some nice car chases in the movie….

I like that they really take their disguise very seriously. They dress up in rather clunky men’s clothes or sports clothes so that you can’t even tell that they are women unless you get a closer look.

Also, their masks are very effective as they really disguise their faces.

Sadly they are quite sloppy when it comes to keeping their masks on. 2 of them are already unmasked when the cops show up who can clearly see their faces.

Also, the 2 masked women quickly unmask (sadly off screen) as they drive away with the female cop. The sexy lieutenant now knows how all of them look. So, they do have quite a problem now…

The scene with the body search is…..damn sexy! The female cop is really sexy and isn’t afraid of showing it (mildly) throughout the movie. And when supermodel Gisele Bündchen searches her body really thoroughly…. that’s insanely sexy…in my opinion.

In my version of the movie all 4 would keep their masks on (Gisele would wear one too) and the lieutenant and the male cop would battle them hand to hand. During the struggle, more cops would arrive at the scene and they would start to overpower the bank robbers. Now they would try to unmask them, one by one. After some resistance 3 of them would be fully unmasked while Gisele would try to escape. The cop would follow her and they would have a long fight where she would desperately try to keep her mask on. 😉

I do have a short BONUS video for you guys!

In this one, you can see how the 4 chicks arrive in New York and later changes their outfits into beachwear(!) as they try to escape the cops.

Oh my! I wouldn’t mind being that cop in that scene 😉

Not every day you check a car with 4 models in bikinis in it!

This is the movie:

The IMDB score of 4.5 is really surprising to me! Yeah, it’s not a really good comedy but the movie has some nice gags, cool car chases, and these 4 gorgeous bank robbers!

For me, that is certainly enough to enjoy the movie. I suspect that many folks might have “problems” with Queen Latifah as the female lead role. I think she was ok in it.

You won’t find many movies with such hot masked women….that’s for sure!

1 full fetish movie with over 90 minutes and another fetish video with around 20 minutes have been uploaded for this month!

The full fetish movie is one of my very favorites of all fetish movies with such a length! A hot actress and great costume and cowl!

The other movie includes Batgirl getting captured by two evil girls 😉

+ now you can pay with credit cards as well, even if you don’t have Paypal!