On this page, I wanna present all the different cowls/masks that Batwoman (Ruby Rose) has worn so far on the CW TV show.

I will show them in the order they were presented in the timeline of the TV show.

Here pictures with all the version so far: 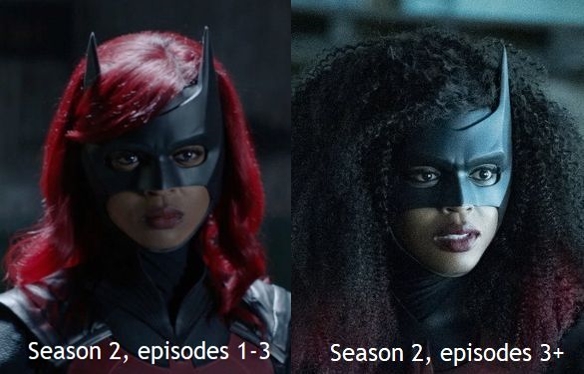 The “Batman Version” (modified for Batwoman from Luke)

– very “round” form as it gets pretty “wide”

– looks like it was made completely out of rubber

– looks much softer in comparison to Version I (fewer edges)

It is very different from the others due to the missing wig. That way you can see the whole cowl/mask.

On the bad side, it looks very wide which gives Batwoman’s head a slightly weird shape.

On the other hand, I really like that it looks very much like rubber and not plastic (as Batman’s mask in the Nolan movies).

The Batwoman cowl from the Elseworlds Crossover, which takes place between episodes 3 and 4 of the TV show, but was shown BEFORE the TV show, as the Crossover was shown before the show started.

……and for promo material:

– most nose “concealment”, only very very little is viewable

– midface section uses a slightly different color/material(?) than the rest of the cowl

It looks good. The combination with the wig fits. It looks a little bit “edgy” (eye section, extra-long nose cover)

The modified Batwoman cowl, in which Batwoman showed herself as Batwoman as the people confused her with Batman in the other cowl.

……and for promo material (examples):

– The material looks like rubber completely (unlike Version I that was used in the Elseworlds Crossover).

– It looks more narrow than the previous cowls.

– The material looks thicker than before

It covers enough of her face, looks secure with the chin strap. Hard to tell if the cowl goes completely around the head as the wig is always wrapped around it.

A slightly reduced version without chin strap and neck protection.

– The chin strap is gone, alongside most of the material on the sides below the nose

– The neck protection is gone, for the first time see can see Batwoman’s neck

– The mask material is now thinner with a sleeker design

– Her wig looks a little different(?)

I spotted this cowl last year on a set picture and was surprised by it.

It does look pretty good. I’m not sure why they changed it. (comfort?/storywise?/optics?)

If the mask isn’t attached somehow, the missing chin strap could become really dangerous, as the mask seemingly goes off much easier than before.

Also, the missing neckpiece exposes her vulnerable neck. Why would she do that?

The biggest advancement in my opinion is that they could now film unmaskings much easier.

Actually (seemingly) the same as Version III from season 1 that they used from episodes 3-10.

Now of course with Ryan Wilder/Javicia Leslie in it! 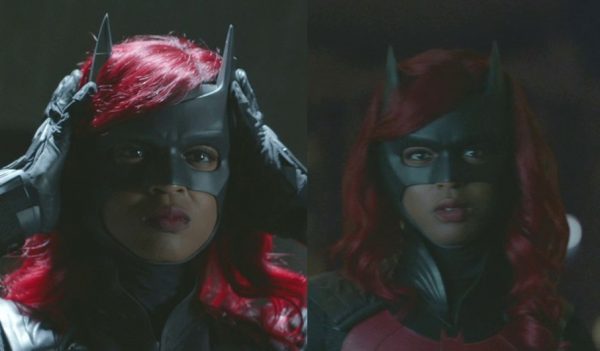 Debut in episode 3 in season 2

The cowl (seemingly) remains the same, but she now has a new wig ….and a NEW suit by the way!!!

(from promo shots for episode 4)

What do you think about the different versions?