Here we have the masked villainess Ultraviolet in a fight VS Sue Dearbon in her awesome catsuit!

This season the Flash didn’t offer many highlights for me. A lot of episodes with uninteresting plots. Iris wasn’t seen in pantyhose and/or boots the whole season so far.

No masked villainesses or heroines.

In the episode before this one, this started to change a bit as Sue and her awesome catsuit were in a scene where she breaks into a well-secured building.

To my frustration, she broke in there without wearing a mask! Good plan! Walk into there and perhaps a security guard or a camera can see your face….. and you are screwed BIG time!

I yelled at my TV but that didn’t change anything 😆

Especially odd, since she was wearing a full face mask (impersonating another person) in an episode last season (link).

And otherwise, I would certainly have posted about it here with a video.

Luckily, one episode later we get Sue and her awesome catsuit AND the masked villainess Ultraviolet who shows up here and there throughout the show.

Yeah, Allegra is also in the scene but without adding much fun to it….even the fight scenes are decent.

I added two short scenes to the one longer scene in the coffee shop to give Sue …and her awesome catsuit 😉 …a little more screentime!

They have a couple of more scenes in the episode as well! But I choose these scenes as my highlights.

If Sue would combine a cowl on that catsuit….that would be FANTASTIC! Perhaps made of the same material as her suit…or latex…or rubber.

What we have here is already pretty great …in my opinion. Of course, a nice unmasking would add a lot to it, but unfortunately, they both already know who is hiding underneath that mask.

But finally, this was a Flash episode that really was interesting again! At least Sue seems to stay on the show as she mentions that she will stay in Central City for a while. And perhaps she might have another scene with a mask as well.

So…hopefully this won’t be the last time I post about season 7 of the Flash!

Wanna know from which episode this is exactly?

What do you think about these scenes?

Sorry for not posting on the last weekend. Time was very limited since I was away for most of the time.

On sunday I was actually at the german Comic Con in Dortmund, more news on that this week.

I was thinking on how to post on the episodes of the CRISIS crossover.

Before I watched the first episode I thought about posting about each episode…but now I am sure that that wouldn’t make so much sense.

Time to present all the news of the last days on the biggest TV crossover event ever!

These are the dates and shows involved in the crossover:

Here is the teaser:

Never have seen a title screen so often like in this one….. but I like all the teasing in these snippets!
Bring it on!
I’m looking forward in great anticipation to this one! Especially for Batwoman and all the big changes it brings to the Arrowverse.
There will be casualties, I am sure not “only” the one we all know of.

Here is the poster: 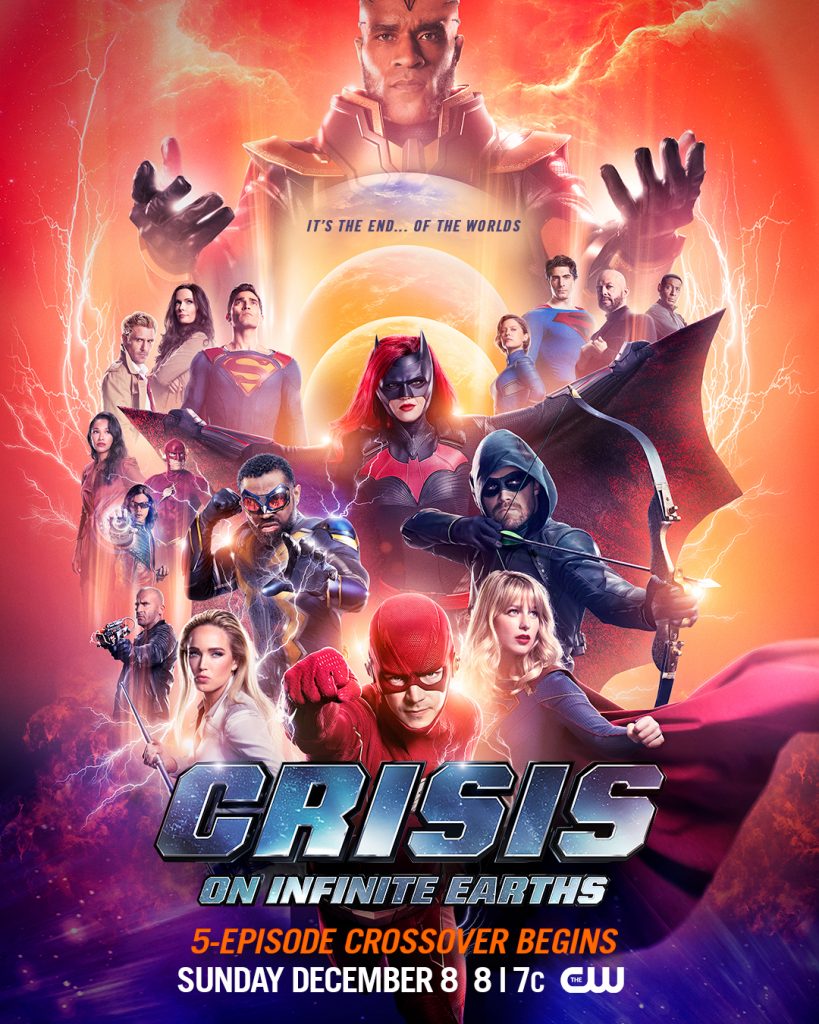 But weird that they used that old promo picture of her….she doesn’t even have that cowl anymore.

She has a new cowl since episode 3, the one from this poster was only seen in the last years crossover (and some promos).

And here is the synopsis for the first three episodes (with some spoilers):

And also see official promo pictures of episodes 1-3 of the crossover:

Well, last years crossover was already big, but THIS one takes it to a whole new level!

So thrilled to see what will happen to the Arrowverse!

This new promo picture from the CW has the vital info we have been waiting for….

And as you can see on the right side, I adjusted the Batwoman countdown-clock to that date! 111 days to go!

The show starts just a little earlier than I expected, and I feel like it is an early birthday present when it will hit the screen. 🙂

The filming of all episodes (besides 1, which is already completed) will start in early July.

Keeping these two facts in mind, I am sure we will get new material and facts on the show next month. Promo pictures, pictures from the filming…perhaps some videos.

Damn, this guy is excited like hell for the next months…and especially for October 😉

Starting dates of all shows of the Arrowverse:

Are you hyped as well?

Ok, only 9 days left until the big crossover event “Elseworlds” starts with Batwoman aka Kate Kane (played by Ruby Rose).

There is still no real trailer out (nothing with more than 30 seconds) but, perhaps this weekend or early next week at the latest.

Until then….I still have something new to show you folks.

These pictures are a great addition!

Love the good look at her mask in the first one. And Stephen Amell (aka “Flash”) looks really….funny/disgusted (?) in this one. Yeah, he isn’t used to female vigilantes with a real mask 😉

Or Batwoman doesn’t want to play along with the other good guys.

On the second picture, someone is standing behind Batwoman, and pretty close. In my fantasy that person is reaching for her mask from behind before getting a massive kick from Batwoman ;-).

But in any case, I’m still hyped like hell about Batwoman in this show. Finally a heroine with a perfect disguise on TV. Her secret identity is hidden very well, and no one could possible know who she is without unmasking her.

Still it isn’t clear if the mask goes around the whole head (back?), but we will see that sooner or later too.

Here is a “extended” teaser/trailer, but that just means that it has 30 seconds instead of 20 😉

Still not a real trailer, but we do see Batwoman and a Batarang!

What do you think of all of this?

Let us know by commenting below!

A little late, but of course this teaser must be on this blog as well….because…it has the first scenes of Batwoman in “action”!

Ok, just a teaser with some seconds of her…but a great appetizer!

A real trailer should be there soon! 😉

And from this news it looks like Batwoman will first appear in the 2nd part of the crossover (Arrow), so we need to wait one more day for her…..but that is not a problem 😉

What do you think of it?

P.S.: And don’t forget to check my self written story Catwoman – the masked scuba thief!

More masked women on the horizon!

More footage of Overgirl in this video [SPOILERs ahead]:

Starting today I will always include a link, where we can discuss the new post on Behind the mask!

The flash has a real mask, a rubber cowl that provide some real cover and hides his identity quite well. And it can provide a great unmasking (which it did already)! An unmasking were you NOT just pull off the mask with two fingers. For this mask you need to rip it, to tear it. His mask is even connected to his suit. It’s a great design!

But as always in the new tv-shows flash and arrow, the women doesn’t get such a mask. No!

The canary, the huntress, the black canary, and all the other masked woman (except ravager) wear eye masks. And catwoman in TDKR too 🙁 .

The 2 canaries had at least “big” versions  that hide some parts of the face. And the (first) canary wore a wig in addition. That was a nice combination to hide her secret.

But why do you put on such a mask as the new girl from “team green arrow”? (left picture) It’s moronic!!!

I guess it’s the old: “She’s a pretty girl, let’s present her face and give her a mask that hides NOTHING!” – idea from the producers. If you love women with masks and their unmaskings…it is so frustrating!!!

Well, I love these shows and the fact that they are quite a lot of masked women in it lately. But it would be so much better with some real masks!

Because such tiny eye masks….what are they for? They hide noting, provide no safety at all and are not sexy.

But enough from me, what’s your opinion on this?

Well, time for payback! And again, like in the first video… imagine a woman behind this great full face rubber mask…

This is my favorite unmasking “way”. Don’t just pull off the mask… no! Rip it open… destroy it. 🙂

But check it out for yourself:

>>>WARNING: The video contains SPOILERS regarding “the Flash”!<<<

Of course they cheat in this scene by not showing the most important part, but I love the scene nonetheless.

[If you haven’t seen the flash episode aired on November 10th…. SPOILERS ahead!]

It is a really great scene! Imagine this scene with a woman under that rubber mask! The danger of being unmasked in front of the public, the ripping destruction of her mask… Believe me, you don’t wanna miss it! It is a fantastic setting…

So, check it out:

Here is the scene:

In my eyes it’s a fantastic scene! The danger of being unmasked in front of the press and the police! And the actual unmasking!

I love it when the mask is ripped and destroyed. Much more interesting than a simple “pull off”.

And his mask is pretty  good for an unmasking! Of course there is room for improvement… it would be even better if Barry would be conscious during that scenes 😉

I’m curious which one(s) of these tv-shows you are watching? All of them will start their next season in the next weeks….

That will start in late October… (1st season)

Another masked woman will appear in my hall of fame tv-series Arrow! She will be a member of the new show “Legends of Tomorrow”, but also appear in Flash and Arrow.

But no chin strap? That would make an unmasking all too easy… 🙁

The costume is solid.