This one is very special to me!

Actually, this movie was featured in one of the earliest posts on this blog back in 2013.

Some weeks ago I still thought that it actually still was on the blog, but it wasn’t anymore….and honestly, I am not sure what exactly happened.

However, I was planning to make a new post about it. A nice guy recommended me a store that actually has a DVD of this rare movie quite a long time ago.

Finally, I bought the DVD, even it was rather expensive in total, but hey….I just had to have this one in the best quality available.

So, why this movie is so interesting?

Because it’s about a gang of female robbers! They are wearing full masks in two rather short scenes and then are running around in sexy smoothskin wetsuits and masks for nearly 20 minutes!

So again, it would partially fit my Frogwoman blog as well, and I will make a post on it as well, with an additional short scene. More on that later.

So, let’s start this post with the two scenes where you can see the original team of 3 women!

As later on, they are dressing like men to fool anyone who might see them. In a later video, you see who they even hide their “twins”.

The unmaskings are rather disappointing for me since they are cheating big time! I guess the director or someone else was concerned that their hair would look messy if they just pull these masks off. So they got their hair done nicely and held their masks close to their faces and removed them from then on so it would look more or less like they would pull the masks off their heads in that scene. 🙁

I certainly wouldn’t have done it and would have shown their unmaskings without any cuts or tricks.

Perhaps some folks might have been surprised that there are women under these masks, even I think you certainly can see that in close-ups on their masked faces, that these aren’t men…if you look at the “exposed” eye sections.

So, I divided the long hotel robbery scene into 4 videos to keep these short.

That way the chances are better that they can stay on Youtube.

3 more women have joined the team to make the big heist that they have planned.

A big hotel on a rather remote island is their target!

Well, that was quite a robbery! I just love the idea to have 6 women in wetsuits and (modified) scuba masks robbing a hotel!

The preparations pay off and the job goes pretty smoothly for the most part.

Of course, my highlight is the ending where the two guys sneak up on her and then try to unmask her! That is so sexy. The way she desperately struggles to keep her mask on is really well done.

She knows exactly that she would be finished if they manage to yank that scuba mask off. Yeah, she would still have her hood on, but they would see a face that they then could describe to the cops.

Of course, the scene should be a little longer, but ok, it’s a rather AWESOME scene anyhow 🙂

Luckily they are wearing sexy black wetsuits that are appropriate for such a nightly action.

You can find an additional scene on my other blog!

Check it out on Frogwoman org:

Here is the title of this movie:

Here is the german poster to this movie I just found today: 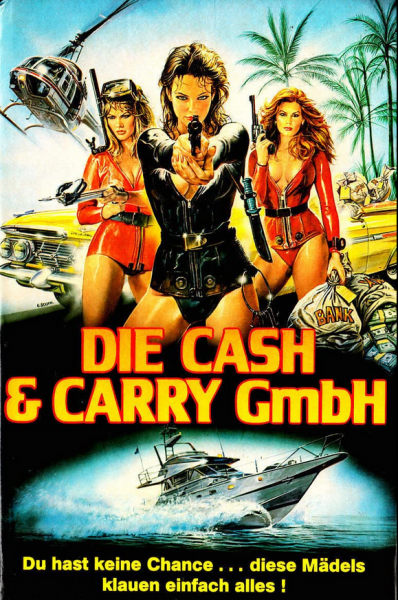 Ok, the poster maker took a LOT of liberties as they are wearing completely different wetsuits, doesn’t look anything like these girls, don’t use spear guns, and so on.

But damn, it’s a very attractive poster for sure 🙂

So, if you want the DVD of this movie, I can recommend the site where I got it.

I had to pay 19 Pounds incl. postage, but it was surely worth it!

Link: Wanna get the full movie in good quality? Buy the DVD!