A little late, but here is my roundup for the Batwoman related news from the San Diego Comic Con!

Some promo material and more have surfaced 😉

(click on the picture to enlarge them to full size!)

And there were some videos!

A trailer for all the Arrowverse shows:

Well, sadly, nothing much new from Batwoman…only some frames around this scene: 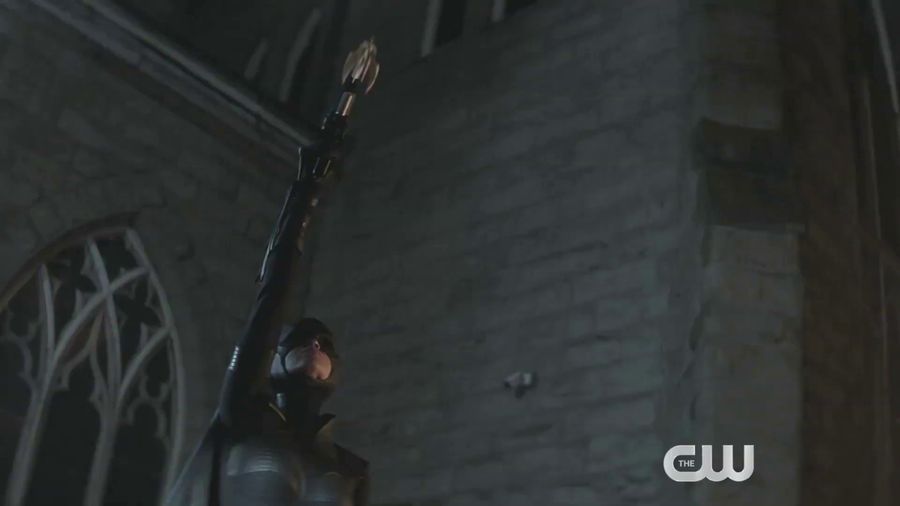 …where Batwoman uses her batgrapple to go after the bad guys (and girls).

Interviews from the unmasked Batwoman and other Arrowverse leads:

And some new info from the producers of the show (with small Spoilers):

– And like in Arrow Season 1, they try to keep it as realistic as possible

None of the actors of the show were on the panel, since they were too busy shooting and couldn’t make it to the con (unlike the folks from Arrow, Flash, Supergirl etc.).
Other than that they didn’t revealed much interesting stuff.
As much as I like these facts… I did expect more Batwoman news from the ComicCon.
And especially some new video material from the show. And despite some frames in the video in my post above this one….there was nothing.
Many visitors at the Con had the chance the see the complete pilot. I am still jealous! 😉

This year they had an additional comic con in Dortmund…the spring edition! (The “regular” is always in early december).

Here you can find my reports on them:

There are several reasons I started to go on these Con’s.

– I wanna see some stars from the movies and TV.

– I like to see all the cosplayers, the artists and the merchandise stalls.

– And I wanna see some masked women like Batgirls, Catwomen, Batwomen, Spider-girls and so on.

….well….the first two worked very good. As I love the Gotham TV show it was a great joy to see so many of the cast in one place. And the other stars were interesting as well!

There were a lot of great cosplays and I found some good stuff at the merchandise stalls as well.

But masked women? Well, yes…but not ONE of real interest to me. There were some “masked” Star wars girls (well, only masked by a lot of face paint). There were a Catwoman, a Batgirl and a Huntress…but all with pretty cheap costumes. There was a Speedy (from Arrow, with an eye mask).

And quite some Spider-girls and Gwens…..but ALL without a mask! I guess they all thought….”they can’t see my  pretty face when I’m wearing a mask”. Well, that’s true, but in my opinion running around with the mask would be the right thing to do as it is the “normal” costume (for Spider-Girl/Gwen). I never saw a Batman without a cowl on all these comic cons.

But I know this from Instagram, there a quite a lot of Spider-girl/gwen cosplayers who present most …or all pictures without the mask.

Sometimes I think that is an ego-think…

And somehow I didn’t want to ask them to put on their masks, so I could make a picture 😉

Ok, time for a video for you folks:

It wasn’t as crowded as on the last 2 cons in december.

Perhaps many folks are happy with one con a year (and only 4 months since the last one). But there will be 2 again next year.

Let’s see if enough folks will come to keep that up.

Some pictures I made:

All in all it was a fun day to remember, even I did not see really good cosplays with masked women. Perhaps next december.

Or I need to find a con were it is all about DC comics…and not to far away. One day I would like to attend the big comic con in San Diego.

Feel welcome to leave your comments below!

Did you ever visit such a con? Did you like it?

It is still time to see the VIP-club videos from April!

Some of you may remember my little post about the german Comic con in Dortmund last year.

Well, this year I went to it too…..and I wanna write something about it and have prepared a little video.

This one was actually my second Comic con. And compared with last year…..hmh, I would say I was/am a little disappointed.

Ok, doing something for the first time is always a little more exciting I guess, but the main reason for my disappointment is clearly the lack of …..(well-) masked women.

Because to be honest, that is my main motivation as it wasn’t very cheap to travel to Dortmund and buy a ticket for the con.

What was really good this year were the Hollywood guests (check the video) and that it wasn’t too crowded with now 3 instead of last years 2 halls for the Comic Con.

And of course…seeing so many folks dressed up in often great costumes is always very interesting and/or sexy (in case of some really sexy dressed women).

But back to my main motivation:

There was NOT ONE masked woman with a really good costume (from what I saw).

There were two Spider-Gwens/Girls with good costumes, but without masks (DAMN! The mask is an/the essential part!). There were two Catwomen with really cheap costumes, not sexy at all.

And I didn’t find a single Batgirl, Batwoman, Spoiler or Canary! In general there were way too less DC characters around. And with the upcoming Batwoman appearance on the Crossover in a few days I thought there would be one or two at least…. Weird. Well, I only visited the Comic Con on sunday and not on saturday and sunday. Perhaps there were more masked women on saturday…don’t know.

So many costumes from Star Wars, Games of Thrones, Walking Dead, japanese Mangas, Horror movies. I guess I need to visit some sort of DC/Marvel-only Comic con, but I guess that doesn’t exist. 😆

Ok, I do know that a Batgirl/Catwoman costume that I find really attractive is pretty expensive. And that it is much easier to dress up like Harley Quinn for example. And ok, making a really good cosplay of Batgirl or Catwoman for example is tougher as most others. But there wasn’t a single rubber cowl on all these women…

Perhaps I will check out the “Heroes and Villains” fanfest in London or when it comes to Germany one day.

Next year the german comic con will be two times  in Dortmund. Hmh, I have to think about it. But I guess I will attend at least one of them.

And here is my little video:

As promised, I wanna share my impressions from my first comic con in Dortmund yesterday.

As I understand it we didn’t have comic cons in germany before 2015. And now we have the “german comic con” in 4 different cities throughout the year.

In addition there is the “comic con germany” that is just once a year.

As I heard it was very crowded on saturday. Last year they used 4 big halls, and the folks had enough space. This year they put the con in just 2 big halls…

Well, I was there on sunday. It was crowded, but not on a really annoying scale.

I was hoping to see some Catwomen, Batgirls and other masked, female heroines and villainesses.

There were lots of lots of women/girls that did cosplays from japanese mangas… and lots of Harley Quinn’s. And there were a lot of female cosplayers that “did” Star Wars and Game of Thrones.

But regarding masked women from DC or Marvel… well I saw/noticed one Black Cat, two Batgirls, three Catwomen, one Spider-girl (unmasked) and some masked assassin from the Court of owls. I hoped for more… and no Batwoman, no Canary, no masked Spier-girl/Gwen, no Spoiler.  Of course I was only there on one day and of course you can’t see every cosplayer.

I definitely need to improve on my handling of my photo camera and the “photographer” skills. But I will learn from that experience.

From the material I have I edited around 10 really short clips into one short video.

But let’s start with some pictures (nearly all masked women are in the video) :

(click on the picture to enlarge it to full size)

And here comes MY self-filmed video:

In the video you should find 3 Catwomen and one Batgirl (my favorite cosplay that day).

And if you look closely, you will find a second batgirl, without cowl (not facing the camera)

*EDIT* You can see that Batgirl and more great cosplays in this official video at around 0:40:

Well, actually these were my first Batgirl/Catwomen that I saw in “real” life. And that was a pretty great experience. I will try to attend more comic cons in the future. And I’m pretty sure that then I can present better picture/video material. It would be great if there was a con just for DC and Marvel.

But -after all- it was a promising start…

Thanks to all the cosplayers! Great Job!

Did you visited comic cons in the past? What are your experiences?

Hey folks, for today I got 2 videos with a batgirl cosplayer. She uses the new batgirl design from the arkham knight video game.

Here is the 1st video:

And here is the 2nd video:

Great mask in my opinion! The rest of the costume is… well… ok.