Today it’s all about the Batwoman TV show on this blog as the season finale is about to be aired today (9 PM on the CW)!

Of course, I have seen many season finales of many TV shows over all the years…it’s always a bittersweet feeling for me.

Especially with a show that I follow so intensively like this one. Even before the episode airs it’s a bitter feeling as the fact that it will be the last episode until October 13.

Luckily the show does come back for another season (and hopefully some more beyond that) and the break is much shorter than it usually would be.

It’s also a sweet feeling! After all the build-up towards the season finale….I expect a lot of action and drama in it…and a nasty cliffhanger to keep the tension towards season 3. 😉

And from what was already teased and released….A LOT will happen in this episode! As we already could see in promo pictures, Batwing will make his debut in this one!

Also team Batwoman has to fight Circe, Black Mask, and all his goons, incl. Tavaroff who will receive a special “treatment” 😉

And on top of that…they have to do that without all the gadgets that Circe sole! Luke will have a lot on his “to do” list. Not only he needs to make another suit for Ryan, but he also has to make his Batwing suit as well plus some gadgets for both of them. I wonder how he will pull that off…. I wouldn’t be surprised if he would get help….but from who? That is the big question!

They have to find a way to bring Kate back and restore her memory fully. Does someone have the password that Enigma used on her? Will Kate be herself at the end of the episode? Or will she still be Circe and will be a villainess for season 3?

Many questions that need answers! Can’t wait to see the episode tomorrow as I can’t see it live. I will need to be VERY cautious tomorrow to avoid spoilers until I can watch the episode.

Here is a promo poster that the CW made for the finale: 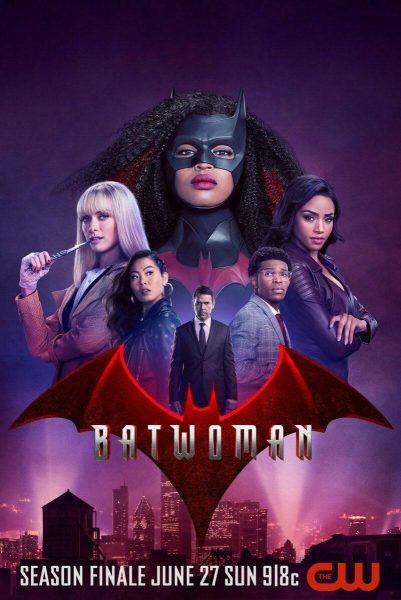 Interestingly Circe-Kate isn’t on it, but Jacob is. He wasn’t shown in the last episode, will he be even shown at all ….besides maybe a phone call scene?

What about Julia and Angelique? Both are missing from the show for quite a while now….. But it would be cool if at least one of them would make an appearance!

And what will Alice’s role be in that finale and beyond that? Pretty sure she has a score to settle with Black Mask as well and perhaps she will end up fighting side by side with team Batwoman in this one.

Here are some (selected) promo pictures for the episode:

Can’t wait to see the episode tomorrow and I will post my review on Tuesday!