A story about a young woman Kanyawee who got revived by her father after she was dead and became a semi mechanic human being named Natwara. Due to her fighting abilities, she is joined by other females under the name Kularb Kror Petch, who are after to destroy a bad organization. After the death of his girlfriend, Techit also joins Kularb Kror Petch team to investigate who is this girl that looks like his ex-girlfriend Kanyawee. Little does he know that it was his own father that caused her death in the first place. 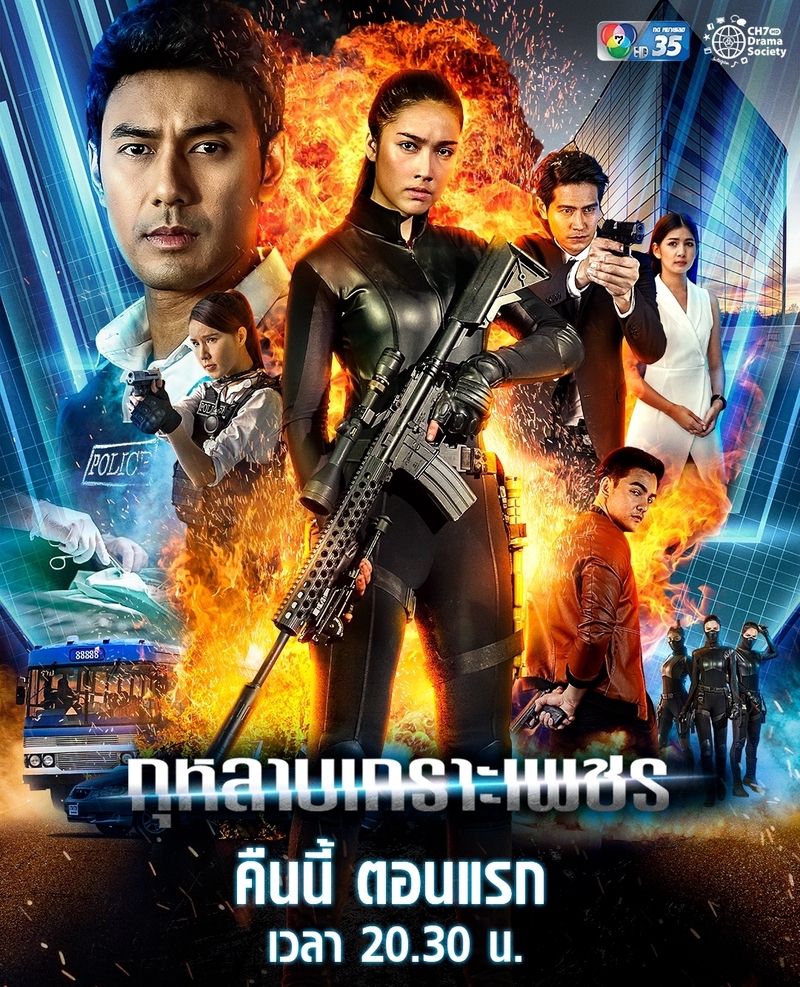 A pretty bad poster for an outstanding TV show. Unfortunately, the main actress doesn’t wear her mask on the poster and the other three….are barely visible on the lower right side

This one came out of nowhere. Since the big majority of Asian TV shows are flying completely under the radar for folks who don’t actually live there….I never heard of this one until some friendly user of the “Behind the mask!” forum mentioned it. Normally I wouldn’t care much, as Asian TV shows are mostly not available with English subtitles or an English dub.

Of course, a single unmasking scene for example would somehow “work” without understanding the language….but it is SO much better if you can understand the storyline.

Luckily, after a quick search, a site surfaced that offered a version with English subtitles.

I was thrilled and started to watch the show from the beginning.

The first two episodes were pretty……bad. The story was pretty weird and it was like an over-the-top soap opera with some action scenes.

If I hadn’t known that there would be masked women later on….I might have stopped watching at this point.

But in episode 3 there were already a lot of interesting secret identity scenes, even without the costumes and masks I knew from pictures.

And in episode 4 it really started to fascinate me. A team of 4 women in sexy catsuits + good masks! What a scenario!

The next episodes delivered a lot of great fight scenes and …. also delivered some stunning scenes with unmaskings, attempted unmasking, secret identity struggle, and more!

After I watched the whole season…..I knew this was perfect material for the Hall of Fame on this Blog!

This TV show has some serious problems. It has overboarding soap opera elements that I have never seen in this form (as I normally don’t see stuff like that). The story has some strange turns and often the characters made really weird decisions. BUT the show offers 4 masked, pretty women with sexy costumes, great fight scenes that are often better than in big Hollywood movies(!)…..and some fantastic scenes with “mask action!”

In the end, I was happy that I saw every minute of every episode as it always deepens the connection to the characters and really improves the thrill of the good action scenes (incl. the ones with “mask action”). And of course, it helps also to know the story behind all that.

The story is often weird and has some problems for sure. But it’s ok, even you roll your eyes quite often. But in the end, the storyline offers a team with masked women in catsuits 😉

Simple, but effective masks that cover enough of the face. A little too easy to remove them.

Sexy catsuits! Again, a rather simple design, but better than the average catsuit from many SHIP videos.

Solid. For such a TV show they are doing a decent job. Especially the main actress (Hana Lewis) that has to perform a lot of emotional scenes.

…..will be added in the future