Season 3 is 49 days away (October 13) and it was rather quiet in the last weeks after the 3 casting announcements earlier.

Some set pictures surfaced on social media and I wanna show them here, first these two:

If you check out these pictures in detail and watched the episodes you can spot a small costume change.

As you can see in this comparison from Batwoman Brasil: 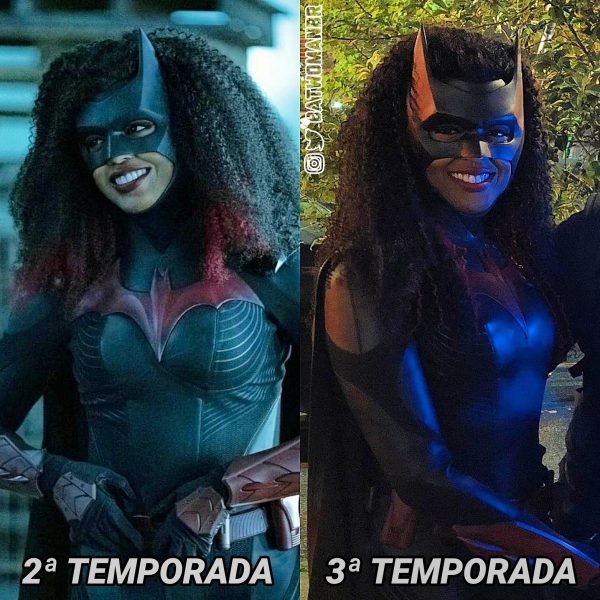 ….they seemingly changed the wig a little as it has less “volume” now in season 3, and it seems that the hair is now a little longer.

Will have to see if other shots will confirm that, but I’m pretty sure this change is no accident.

Well, I do prefer the new(er) look as the wig is less dominant….which is a good thing for me.

And when I see these first two pictures….I can’t wait to see Batwoman and Batwing in their first action scenes together!

Also, I do hope that we will see some promo material very soon!

It’s not about season 3 this time….but about the Flash TV show!

To be precise it’s about the first 5 episodes of season 8 of The Flash.

Among other characters, Batwoman will appear in this 5 episode event that is called Armageddon! 🙂

Ok, I don’t know how big her part in these episodes is…but even if she would be only in one episode for 5 minutes….it would be great.

And I think she will have much more screentime than that 😉

It’s also nice to see Atom and Black Lightning again…as well as Alex as “her” Supergirl show should be still running by then.

But …besides Batwoman…. I’m most excited about having Mia Queen back in her costume and mask!

For me, it was sad news that she and the other Canaries didn’t get the TV show that she deserved in my eyes.

Well, first Batwoman comes back in October (13), and ….starting on November 16… we get this “Armageddon” event with 5 episodes.