Today the CW released the starting date for season 2!

And it’s actually the first Arrowverse/CWverse show that’s coming back!

Black Lightning will return on February 8.

The Flash will return on February 23.

Superman & Lois will premier on February 23 right after the Flash.

Here a newly released graphic with all the start dates:

(the Batwoman picture is NEW!) 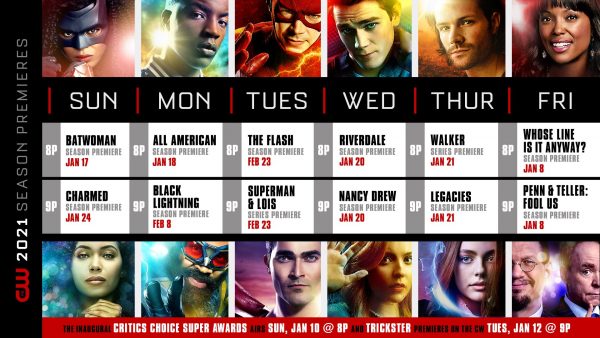 Glad that Batwoman is the first show (of the Arrowverse/CWverse) that will be shown next year! I do like Black Lightning and the Flash as well, but I can definately wait some weeks longer for them.

Don’t know what to think about the Superman & Lois show yet. I will give it a try, but so far I’m not thrilled to see it.

A short but great video from set shows Javicia in the new costume:

Some screenshots from the video:

Wow, a really good, pure view on the costume! Even the cowl is missing…

She looks GREAT in the costume! 🙂

I updated the season 2 preview page in the last days!