This one was a lucky find I stumbled upon by pure luck.

I saw this poster, and of course I HAD to watch the movie 😉 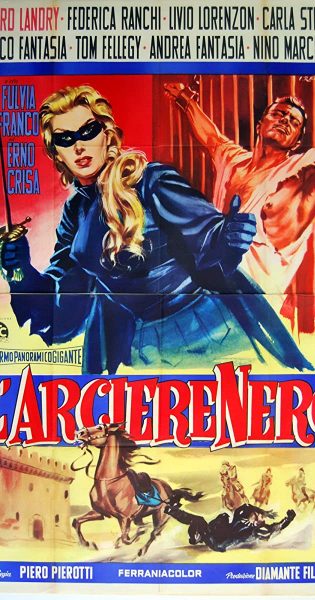 As you can see the poster is strangely cut at both sides, but well, the most interesting part is there to see.

Quite interesting is that the hero is in the background while the masked woman is in fact the “right hand” of the movie’s villain.

But I guess they thought it would help to put an attractive, mysterious woman right in the middle of the movie poster 😉

Let’s move on to the movie, here are some pictures as a preview:

I really like the idea of having such a masked villainess in the movie! It is a rare thing in a movie even today, but especially hard to find such a character in a movie from 1959!

Her movie role is quite odd, naturally to the age of the movie and the way women were portrayed…..she doesn’t actively fight, but rather tortures and kills people from the distance or by backstabbing them (literally). She fights with an epee for about smashing 5 seconds, but we will come to that later on.

Now to the video above: The ending is bitter sweet for me. It’s great that he rips her mask off in such manner. Sadly…we can’t see it as the movie shows it from that perspective. And she runs away without allowing us to see her unmasked face. What a wasted opportunity!

And it’s also sad that she actually never puts on her mask again througout the movie. 🙁

She always is wearing that outfit, where she covers her hair completely. Ok, that could be seen as some sort of disguise, but well, doesn’t really work for me 😆

The movie had also a german audio track which I used as I watched the movie. And as you can possibly tell when you know german TV it was a german TV airing (MDR is the channel).

Interestingly the german dialogue is quite different. As the movie is italian, both english and german audios are dubs from the original language.

In german the villain approaches her and says “….say that you laugh at me under your MASK….” in translation.

Here is the scene for those of you who can understand it:

So, you may wondering what happens to her at the end of the movie?

Well, here is her ending:

[Watch the video first before you continue!]

Spoiler title
After another sneaky murder she meets her final fate as some random soldier kills her with a banner pole!?!

Quite an odd way to finish her off. Especially as it should have been the hero’s job to do that and get his revenge on her after all the things she had done to him, his father and friends.

Interestingly we finally see her hair, she is finally fully “unmasked” in these seconds. A continuation error as we never see that cloth coming off as she still was standing.

And here is a promo poster for the movie where she actually shows her hair (which she never does like that): 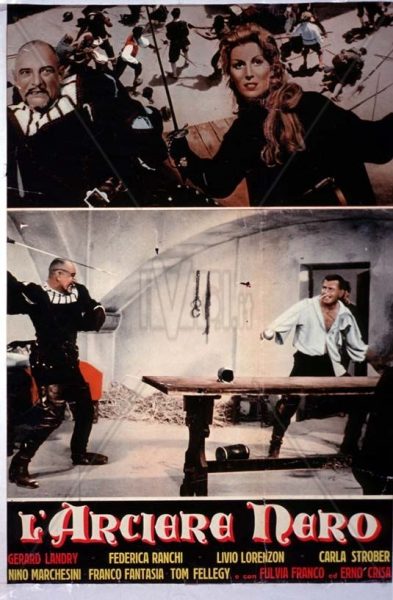 If you want to know the title of the movie:

What do you think of her and her scenes?