Well ok, not all at once, but two of them at the same time 😉

Thanks to the friendly guy who recommended me this gem that combines quite a lot of great features!

I decided to post this one here instead of my Frogwoman blog, but it would fit in there as well!

Wasn’t easy to cut this video as they have very short scenes in the original where they cut pretty often to the next location. But I included all of her scenes in wetsuit and gas mas.

Ok, in my version she would have dropped from a boat in scuba gear and rubber wetsuit, fighting off 2 or 3 scuba henchmen in a long struggle, arrived on the island, put on her gas mask, and then would have an extensive fight with a sexy villainess, where both would try to yank off each other’s gas mask to kill the other one (as there would have been gas in that room) ….but that’s just my fantasy 😉

The wetsuit/swimsuit/gas mask combos are great and I love how she infiltrates the island as an agent. Sadly, we see such stuff way too rarely in movies or TV shows.

Oh, and I have a little bonus video for you guys!

At the very beginning of the episode you have this scene:

That demonstrates what could have happened if she would have been gassed with this stuff.

Wanna know from which movie or TV show these scenes are?

Today the third episode of the new Batwoman season will air on the CW (8 PM)! 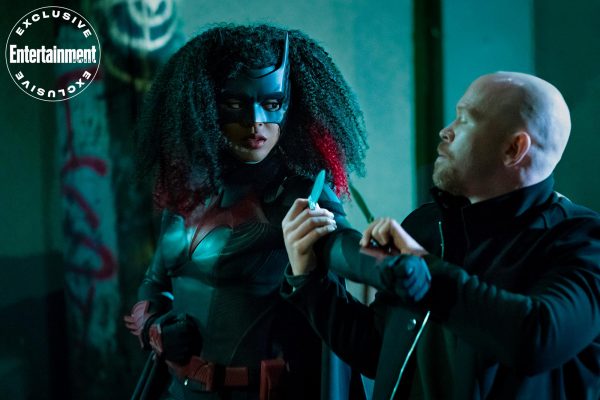 After this one there will a break as the Superbowl is on February 7.

So, the 4th episode will be shown on February 14.