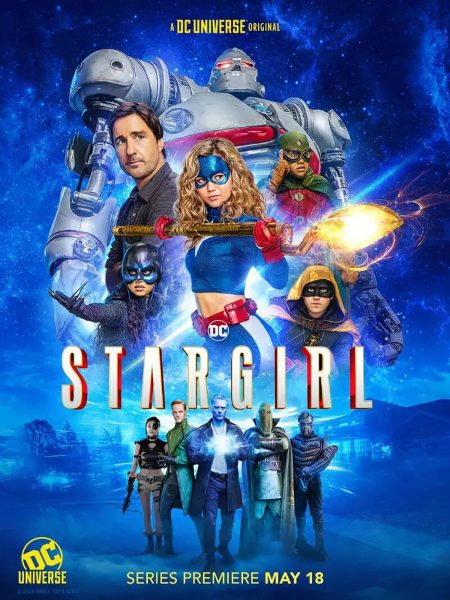 Teenager Courtney Whitmore joins the Justice Society of America. Based on the character from DC Comics.

After I waited nearly 20 years for a TV show with a masked woman as the lead character Stargirl debuted just one day(!) after the last episode of Batwoman’s first season was aired.
Stargirl’s first season started at DC Universe and on the CW as well.
Stargirl is very different from Batwoman. Stargirl is a teenager, the show has a lot of fantasy elements and a much brighter atmosphere in general. Stargirl is placed in Blue Valley, Nebraska. A rather small town (seemingly) without any crime. The stellar opposite of Gotham.
I prefer the setting in the Batwoman show.
But I must say the Stargirl show quickly grew on me as there are three masked girls/women in the superhero team. And I really love Wildcat’s massive rubber cowl! A very rare thing to see a woman with such a cowl that disguises her very good.
Even there are some dark elements Stargirl has a lot of comedy moments that fit the general atmosphere.
After season 1 spends a lot of time introducing all the characters I am looking forward to season 2 and hopefully more action and secret identity issues.

Well, there is a lot of room for improvement in this department. A LOT!

Stargirl has some secret identity issues but none are related to an unmasking. I don’t think we see any unmasking at all in the whole season, not even self-unmaskings.

I remember Wildcat putting on her cowl for the first time, but that’s about it.

A lot of character introduction during season 1. Well, it was needed as all the team members needed to be introduced.

Even some of the villains got episodes with scenes where their background was shown in long back flashes.

The category that pushed this show into my Hall of Fame!

But my favorite is the Wildcats rubber cowl! Would love to see an unmasking with that.

Especially as it not only hides her secret identity…it also is the source of her power!

I hope that someday a villain at least tries to unmask her….

Dr. Mid-nites cowl is nice as well, but the teenager behind it is rather …annoying.

Rest of the costumes

Stargirl’s costume is….a fitting one for a teenager. Basically shorts with a top.

Wildcats tight catsuit is quite sexy and fitting.
Again, Wildcat steals the spotlight from the lead character of the show. 😉

The actors who are all at least in their 20’s do a good job in portraying these teenagers.