Finally we can see how Javicia Leslie would look as the new Batwoman aka Ryan Wilder!

As the photographer said these pictures are from episode 2 or 3 of the new season.

And well, and from what we can see….it seems very much like she has the same costume as Ruby Rose aka Kate Kane had.

Well, for starters at least….

At the DC Fandome Caroline Dries mentioned that her costume would evolve during the season to really fit Ryan Wilders character.

Here are my favorite 4 pictures:

Here you can see many more Batwoman pictures from Canadagraphs:

If you wanna follow Canadagraphs on Twitter…here you go:

As you can see it seems that the new Batwoman now may use a Batmobile instead of the motorcycle that Kate used in season 1!

And it looks like the car will get a CGI treatment for the final look. Hard to say how it will look in the end right now.

I hope that we get some official promo images really soon!

Some hours later we finally got the first offical picture of Javicia Leslie in the costume!

Ok, you don’t see the full costume as you can only see her head, but it’s a start. 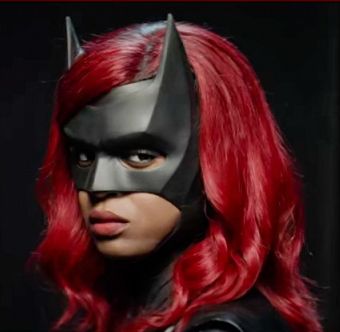 Javicia Leslie posted it on Instagram, and the attached text says:

Look out, Gotham, I’m suited up and ready to go… But just wait until Ryan Wilder puts her own spin on the Batsuit.

So it’s “only” her costume for the first episodes in season 2. Hope we will see her final costume soon!

If you compare it with the cowl that Ruby Rose wore, there are only small differences:

Javicia’s nose is even more covered by it and seemingly they don’t use the black paint around her eyes.

And there is a chin strap on that cowl again!

Looking forward to an official promo poster for season 2 with her!

These two are on fire! 🙂

Batwoman and Sophie are in good mood!

More and more pictures of the new Batwoman are surfacing!

Posted here along with an article:

Well, the last 24 hours brought quite a wave of pictures!

First a lot of set pictures, than an official pictures posted by Javicia and now 6 more good pictures from 2 sources. 🙂