So, this will be my last Stargirl post about an episode in 2020.

A little late this time, but there wasn’t much interest in it so far (on my youtube channel and Blog) so I guess it’s no so bad.

So, let’s start with some pictures of the final episode of season 1!

Preview (for both videos):

HEAVY SPOILERS ahead, I would recommend to watch the whole episode first!

That was a good finale for the season in my opinion.

Will be interesting to see which ISA members are really dead besides Brainwave.

No clue what happened to tigress. Sportsmaster may still be alive as well.

Dragon King have cheated death before, but I do think he is dead after all.

Icicle….well, he was crashed to bits…but maybe he can melt the single parts and put himself together like the the T-1000, even I doubt it.

Cindy is still there, Solomon Grundy and the Gambler too. Plus two new bad guys that are shown or mentioned. Need to do some background work on them.

I’m glad that Wildcat killed Brainwave, that was the right move, he deserved it big time.

I’m not happy that there are still some folks who know who Stargirl is, her secret identity isn’t really secret. Somehow I have the feeling that there will be always bad guys who know her secret

which makes her mask more decorative then concealing.

Also that there was no unmasking action at all in the whole season. Not even a self unmasking or unmasking attempt.

I had feared it would be like that since Brainwave found out that Courtney could use the staff and its powers in episode 1. Luckily he was silenced for a while but no one from the JSA took an effort to go for her mask in any situation.

Don’t get me wrong I relly enjoyed the whole season and the finale too as it delivered a lot of intense action and a lot of screentime for the masked heroines.

So far the public didn’t really took notice of the whole ISA and JSA, they fight their battle in the shadows pretty much. I wonder how that will develop in the future.

Blue Valley is such a picture perfect community with seemingly no crime to fight at all…. pretty much the exact opposite to Gotham.

So, I don’t think the JSA will really have to fight common criminals in season 2. Ok, it would be an unfair fight with their super powers, but Supergirl does it all the time, even you can’t compare the situation.

The end of the episode was a little too much….Stargirl and Stripe sitting on that surprisingly strong tower, the american flag was waving in the wind…..

Will be interesting too see how Starman will fit into the team in season 2. Will more heroes join the JSA?

What plans and members the new ISA will have? Who will be in it?

I do hope that there will be some unmasking action or secret identity struggle in season 2. That would be really great!

Also, how many episode will season 2 have? This one had 13, but now the show has moved to the CW, it may get more in season 2. Hard to say as it isn’t even clear when the second season will start.

Am I the only one who thought the big satelitte dishes and the gigantic undergorund base was worthy of a 60’s/70’s Bond villain?

Reminded me of it….especially as Gambler also had a cat as he was working on his evil plan 😆

What do you think about season 1 in general and the final episode?

What do you hope to see in season 2? 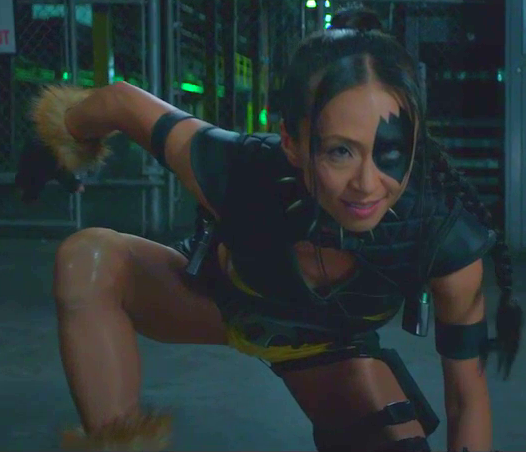 In the last episode Hourman and Dr. Mid-Nite get introduced.

And here is the video (all scenes with masked women from the episode):

On the one hand this episode is interesting and important as it introduces Hourman and Dr. Mid-Nite into the show.

On the other hand this episode offers only barely 5 minutes of Stargirl in costume and NONE(!) action at all. Like in the last episode Stargirl doesn’t have to fight against anyone.

And that is so far my biggest problem with the show.

In episode 1 Courtney had a short fight with some punks while wearing a bandana to mask herself. A nice scene, but short.

In episode 2 Stargirl fought Brainwave in a really good action scene. So far the best action we got.

In episode 3 Stargirl had a very short fight with Icicle. Nice, but not enough.

In episodes 4 and 5 there was NONE action as she was in costume (in regards of fights against someone).

The show really need to improve on that and I’m sure it will.

Because now all the characters of the hero side have been introduced.

And the trailer for episode 6 shows that they will get into some serious action! 🙂

Looks like the team get into a fight VS some experienced villains.

Looking forward to this one!

Perhaps the villains are curious to peek under the masks of Stargirl and Wildcat…. 😉

What do you think of the latest episode?